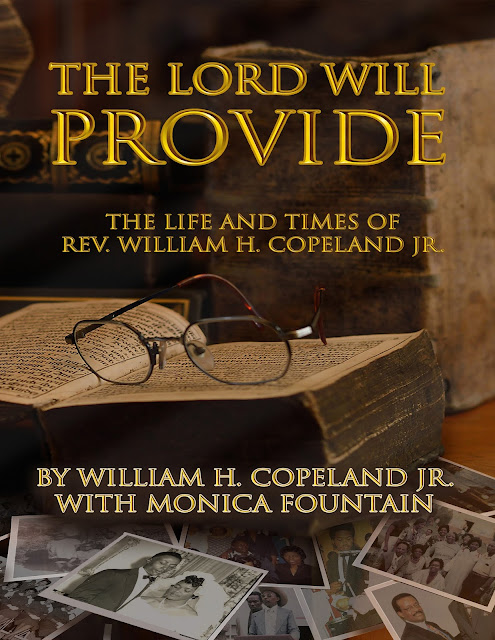 REVEREND WILLIAM H. COPELAND is a fighter. Not in the brutish or violent sense. He is a not a pugilist in the ring. Not a street brawler. But he is a warrior. God’s warrior. A fighter for the Kingdom and for the Gospel of Jesus Christ. A fighter for Civil Rights. A defender of the powerless, the poor, the hopeless and disenfranchised. He has been a fighter all his life.
As the youngest of 14 children born in Dodson, Louisiana, he had to fight with unrelenting and purposeful intent for his life, even from a very early age. He was a sickly child. An answer to his mother’s prayers for a son, he teetered between life and death, cradled by the winds of hope and prayers of ancestors who endured the Middle Passage and tortuous American slave plantations with a fervent faith in God and their eyes set on the prize.
Born and raised in the segregated South, a black boy, he had to fight to survive. Through segregation, Jim Crow, the Civil rights movement, he fought. With every fiber of his being, he fought. Unto death, he intends to fight.
Like his father before him, he heard the call to ministry at a young age, and later the call to pastor. As a young pastor, he fought for the underdog. He fought to build. He fought for justice and for freedom, standing sometimes in the face of bigotry and racial hate, even in Kankakee, Illinois, where he migrated from Kansas City, Missouri, with his wife and two children on the fringe of the turbulent 1960s to become the new pastor of the Morning Star Missionary Baptist Church.
A pastor with a true shepherd’s heart, too often broken or betrayed even by those closest to him, he fought on, his faith and footing in Christ.
“If you’re in a fight,” he often said, “make sure it’s a good one.”
This book is the story of his American life. A memoir on the Life & Times of Reverend William H. Copeland, as told to his daughter. A pastor’s story bathed in the context of the American nightmare known as slavery and also the hope embraced by Dr. Martin Luther King Jr.’s dream, and African Americans’ continue stride toward freedom.
This is not a book of spiritual hyperbole but a personal human journey of the sacrifices, struggles, triumphs and even the failings of a good man with a heart for God. It is the story of what it truly means to be a pastor, to love the people of God.
It is one man’s story. But it is reflective of the journeys of a generation of pastors and other clergy who preceded a new and current dispensation of prosperity doctrine, mega-churches and preacher as celebrity. It is a personal story that, at its heart, calls the church to repentance and to return to its roots of steadfast faith, uncompromising truth, deep spirituality, and social justice. To stand on four words that for William H. Copeland have shone like diamonds, even in the darkest hours, all of his life:  “The Lord Will Provide”
Written by Rev. William H. Copeland with his daughter Monica Fountain, it is a story we can all share.