Why We Need African-American History from a Biblical Perspective

The following is a course written and taught by Rev. Dr. William H. Copeland Jr. for many years at the Morning Star Missionary Baptist Church in Kankakee, Illinois and across the country. The full title of the course is "Why We Need African-American History from a Black Biblical Perspective: A Socio-political, theological and economic review of the record of African-American history."

"A people will never look forward to posterity who never look backward to their ancestors."--Edmund Burke

The question has been asked, "Why do Black people need to know their history?" A companion 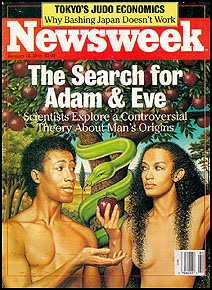 History is the memory of human group experiences. If it is forgotten or ignored, we lose a part of our humanity. Without history, we have no knowledge of our past and no understanding of our present. We could become victims of collective amnesia, groping though a long, dark night of superstition and ignorance in search of our identity.

The mind-altering experience of slavery haunts us like the ghost of Banquo in Shakespeare's Macbeth. My present has been shaped by my vicious past. Both African Americans and Caucasians recoil at the suggestion that slavery still informs and influences the social situation of African Americans. The Caucasian gets upset because he doesn't want to be reminded of hi sin against humanity, and the African American finds it too painful to remember. But remember we must. One of the most magnetic sites in Israel is the Yad Vashem, which is a museum or memorial built in honor of the six million Jews who died in German concentration camps.


As a people, we too need a memorial built in honor of the forty million plus who died in the Middle Passage and on Southern plantations. The Jews remember and are vigilant. We try to forget, only to go from one socioeconomic-political defeat to another. Again Na'Im Akbar says:

The chattel slavery of Africans in America for almost 300 years serves as one of the saddest commentaries of man's inhumanity to man. The tales of this period of our history are so morbid that they will arouse vehement hostilities at the very thought of what occurred. The level of cruelty was incomparable to anything recorded in modern history, including the Nazi atrocities at Auschwitz which were fleeting and direct, destroying bodies but leaving the collective mind in tact.

However, the danger of cynically focusing on the past is that it instigates paralysis of achievement. One becomes so obsessed by what was that he or she cannot claim what can be. Akbar goes on to say:

There is a certain hesitation about dwelling on events of the past. On the one hand, it creates an atmosphere of determinism which removes the volitional possibilities of people to alter their condition. It tends to excuse the perpetuation of past events which could be altered simply by initiative. it preoccupies people unnecessarily and purposelessly with old hurts, tending old wounds. It is an emotional tirade that ultimately provides no constructive solutions for the present. But, those who deny the lesson of the past are doomed to repeat it. Those who fail to recognize that the past is a shaper of the present, and the hand of yesterday continues to write on the slate of today, leave themselves vulnerable by not realizing the impact of influences, which do serve to shape their lives.

Next week: Racism and the Oppressor